June 29, 2017
While I was visiting Swyambhunath, the world heritage site of Nepal, I came across a foreigner while climbing up the stairs. He was sweating abnormally - I tried to ignore with an assumption that he may not be habituated in climbing the stairs. With all the modern facilities and technology available in the country that could be a natural thought for anyone living in the developing world.

But, now he was terrified and panicking. He was trying to talk to the people but to his dismay, the people around him did not understand the English language. The panicking did not stop there and with every passing second, he seemed to be more worried. Then, I walked to him and asked if he was having some problem. His eyes dazzled and his face glowed as he heard me speaking English. "Do you speak English", he asked. I replied, "Yes, I do. How can I help you?" 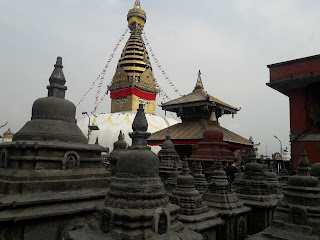 He showed me a scratch in his right hand and spoke hurriedly, "It came from a monkey. Where is the closest hospital? I want to get an injection from rabies." This time I looked closely and it was just a scratch on the surface of the skin. "Just walk down the stairs to the marketplace and get some ointment in the drug store and that could help", I suggested. He would not listen to me. His fear was not calmed till then but instead multiplying. He was cleaning the scratch with hand sanitizer now and then. As he thought, that I would not be of any help - he tried to bypass me. Again, he turned and said, "Which is the closest hospital from here?"

Then these thoughts came rumbling in my mind. "People from developed country are no more exposed to dirt. They are not used to fresh wounds and even a minor cut is a major problem for them. Along with that, they are not used to dead bodies and rotten things. This has caused a lot problem and that was what might be troubling him more than the wound."

Luckily, there was a voice from the crowd, "I am a doctor. Please, let me have a look at the problem." The doctor said the same thing what I had told earlier. This was able to calm him down.