Flight to world's most dangerous airport

June 29, 2017
The flight to Lukla from Kathmandu is 36 to 40 minute only and what is there to write? The plane takes off and lands ...  Wait! there is more to it. Lukla airport is one of the world's most dangerous airport yet one of the busiest airports of Himalayan kingdom Nepal. 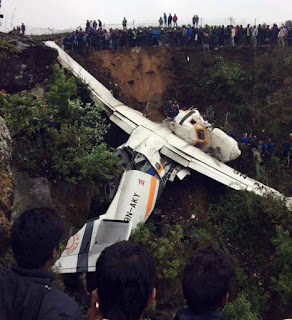 Located at an elevation of 2, 860 meter, flying to Lukla airport requires a lot of courage and very good aviation skills. I have heard many people say that either a fool, adamant or a Nepali can only land and take off in this airport. Interestingly, the airport was built with the help of Sir Edmund Hillary for local sherpas to make them give a sense of development who is not a Nepalese. The airport is constructed by carving a hill. So, what is dangerous about this airport?

The route of the aeroplane is all through the hills and mountains. The weather in the mountains changes so quickly that it cannot be determined raising concerns about the visibility and turbulence. Also, while landing the plane has to go through a hairpin turn which is very dangerous. There will not be a single passenger who will not be scared inside the plane. The planes shake to and fro, at times there is a swift change in attitude and you can feel all these clearly as the plane will generally be very small carrying only 15to 20 passengers at maximum.

I have personally witnessed foreigners praying and after the safe landing hugging the pilot and praising them of bravery. Accidents are frequent and there has been a total of planes plane crashing including both small and big aeroplanes.

If you take pride in your bravery then flying to Lukla airport will be of great testing for you.

Note: The article is not meant to discourage you from flying to Lukla airport.